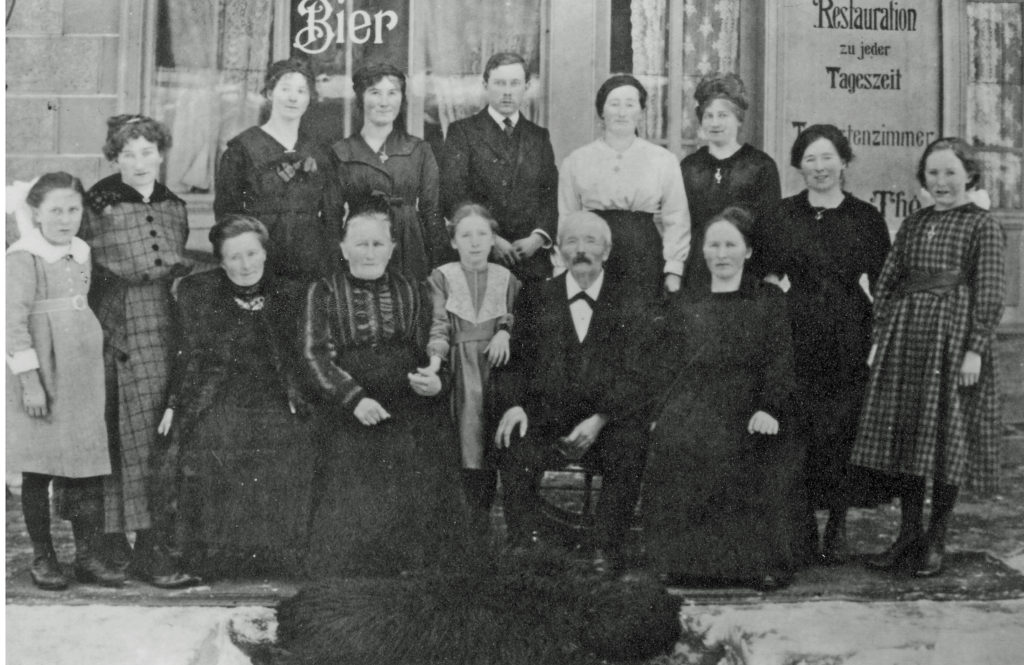 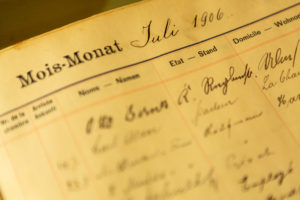 More than 120 years of history

In 1899, the Hotel Gletschergarten was built by Johann and Margaritha Brunner-Brunner and celebrated its 120th anniversary in 2019 with Gaby and Gery and their three sons Matthias, Lars and Nils. A lot has happened in the meantime. Learn more about the hotel’s history, rich in tradition. 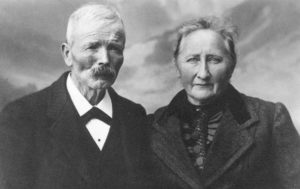 Johann and Margaritha Brunner-Brunner moved into the newly built house on the Gletschergarten in 1899 with eleven daughters and a son. Although there was neither electric light nor running water, a restaurant and hotel began to develop. A cafeteria was set up with six cups of coffee and the few guest beds were rented for one franc fifty cents per night per person. A modest but courageous start in the booming tourist destination of Grindelwald. In 1906, the owner acquired the patent, the house was continuously extended in small steps and the furniture was partly made by himself. For example, food packaging boxes nicely covered with fabric served as bedside tables. Very early on, the telephone was also installed in order to have better contact with the outside world. The Hotel Gletschergarten was given the number 11 and the economic consequences of the First World War did not exhaust the family either: In the early 1920s the first extension was built on the north side and in 1936 the hall extension on the west side followed. 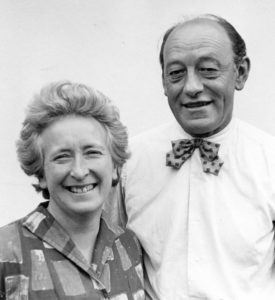 The Hotel Gletschergarten has always been owned by the family. In 1941, the families of son Johann and youngest daughter Huldi took over the management of the house. Huldi had married the painter Dani Füllemann in 1933. In the following years, the three children Sonja, Elsbeth and Peter supported their parents in the business. During the Second World War, the hotel did not have to be converted into a hospital like other houses in Grindelwald. The hotel’s cars, a Pontiac and a Chevrolet, were nevertheless called up by the military to drive high-ranking officers around. Expansion and extension continued in this generation. In 1958, rooms were equipped with baths and showers, and new rooms were added, which were finally made practical in 1965 with the installation of an elevator. Next to the garage, a petrol pump was also installed, from which petrol was sold. In addition to the hard work of the hotel and farming on the family land, Dani Füllemann found time to capture the beautiful nature of Grindelwald in his oil paintings. Even today, numerous paintings of flowers and mountains still decorate the rooms of the Hotel Gletschergarten. The family was also able to gradually hire employees who were housed in the area. 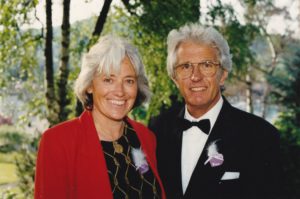 When the Dane Finn Breitenstein broke his leg before the Lowlanders ski championship in Grindelwald, he was unable to return home with his training companions. So he had to stay longer at the Hotel Gletschergarten and recover. There he fell in love with his youngest daughter Elsbeth. After Finn’s return trip, she followed him to Denmark for a year, where she worked at the Imperial Hotel in Copenhagen and stayed with the Breitenstein family. In 1966 the two married and the eldest daughter, Gabriela (Gaby), was born a year later. Finn also went into the hotel business, since Dani died two weeks after Finn and Elsbeth’s marriage – Huldi needed all the help he could get. In 1968 and 1970 the two children Jens and Stephanie followed. In 1980 Finn and Elsbeth took over the management of the Hotel Gletschergarten and in the summer of 1982 they started an extensive renovation and expansion phase. Elsbeth and Finn Breitenstein-Füllemann devote every second of their time to this traditional activity. 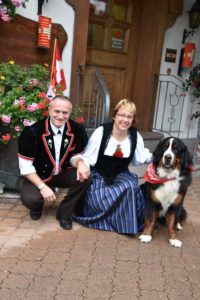 After 32 years of passionate hospitality, Elsbeth and Finn have handed over the management of the Hotel Gletschergarten to their eldest daughter and husband Gery in 2012, and thus to the 4th generation. However, Gaby joined the family business in 1992 after completing her teacher training and spending a few years in the classroom. A year later, she married her childhood sweetheart Gery Michel from Burglauenen, who was then working as a mechanic at the Jungfrau Railways. In 1994, the couple received a very special New Year’s gift: their son Matthias was born and in 1995 a second son, Lars, joined the family. From 1998, Gery also started working in the hotel next door and fully joined the family business in 2000. In 2001, the third son, Nils, joined the family as a latecomer. Gaby and Gery Michel-Breitenstein also continue to run the business with a sense of tradition and commitment. This led to further renovations and expansions. In 2014, the wellness area was completely renovated. All rooms were permanently equipped with new bathrooms and new interior fittings. In 2018 a renovation of the ski room followed and in 2019 the new Gletscherstibli and the holiday apartment Fiescherhorn were built. Gaby and Gery could count on the help of their boys, especially during school holidays and weekends. 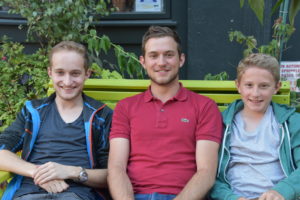 Today, the 5th generation of the family business with training in tourism and the hotel industry is waiting in the wings. The two older brothers Matthias and Lars will open the long vacant Hotel Fiescherblick (www.hotel-fiescherblick.ch) directly next to the Gletschergarten in December 2022. Over the years, the two have acquired a considerable rucksack of experience. Matthias has a federal diploma in tourism and completed his master’s degree in business administration with a specialisation in marketing at the ZHAW in Winterthur in 2021 and currently works at the marketing and communications agency Schmid, Pelli & Partner. Lars successfully graduated from the Hotel Management School Lucerne in 2020 and worked in various places, such as for 2 years as Restaurant Manager at THE OMNIA in Zermatt. He also held the same position at the Faroese 2-star restaurant KOKS. Nils completed his Matura in Interlaken in 2020 and is currently doing a shortened apprenticeship as a car mechanic EFZ at AMAG in Thun. 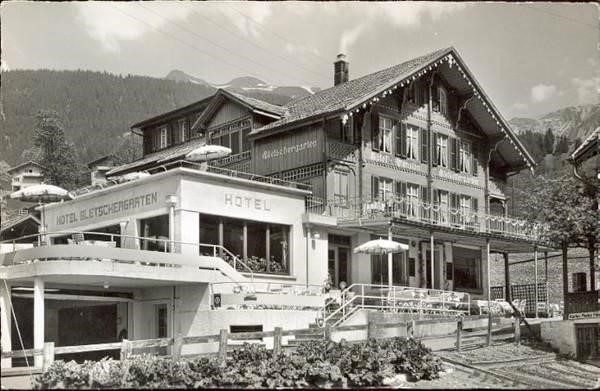 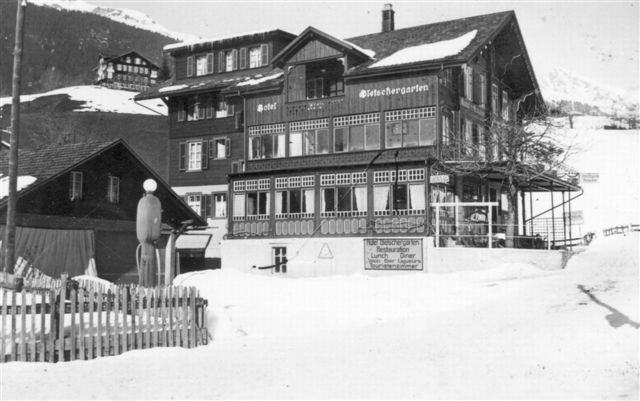 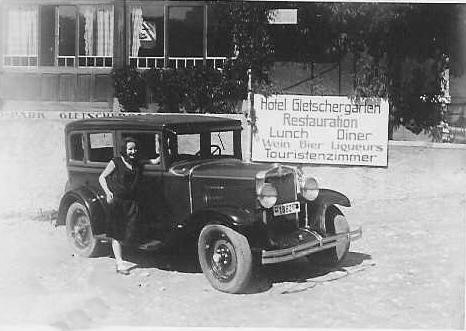 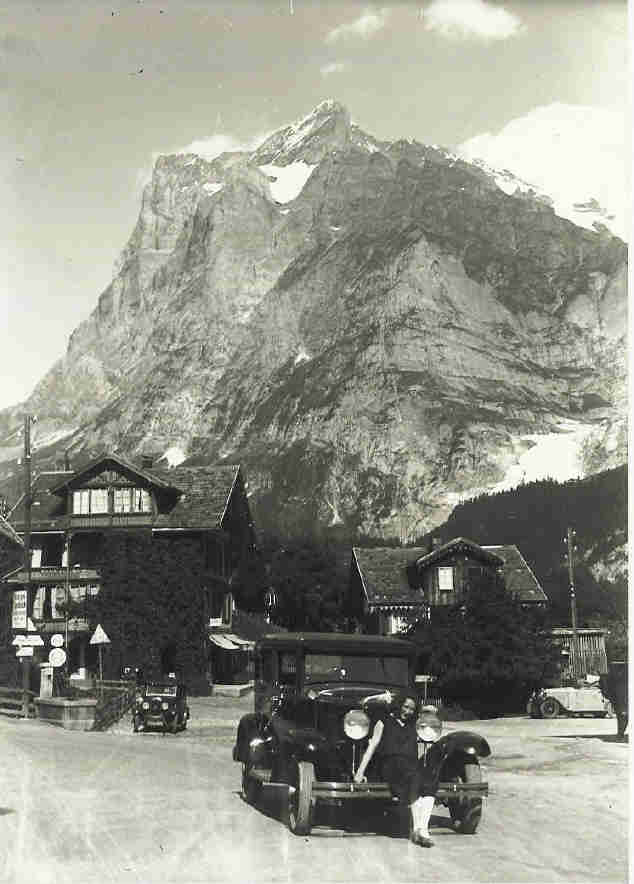 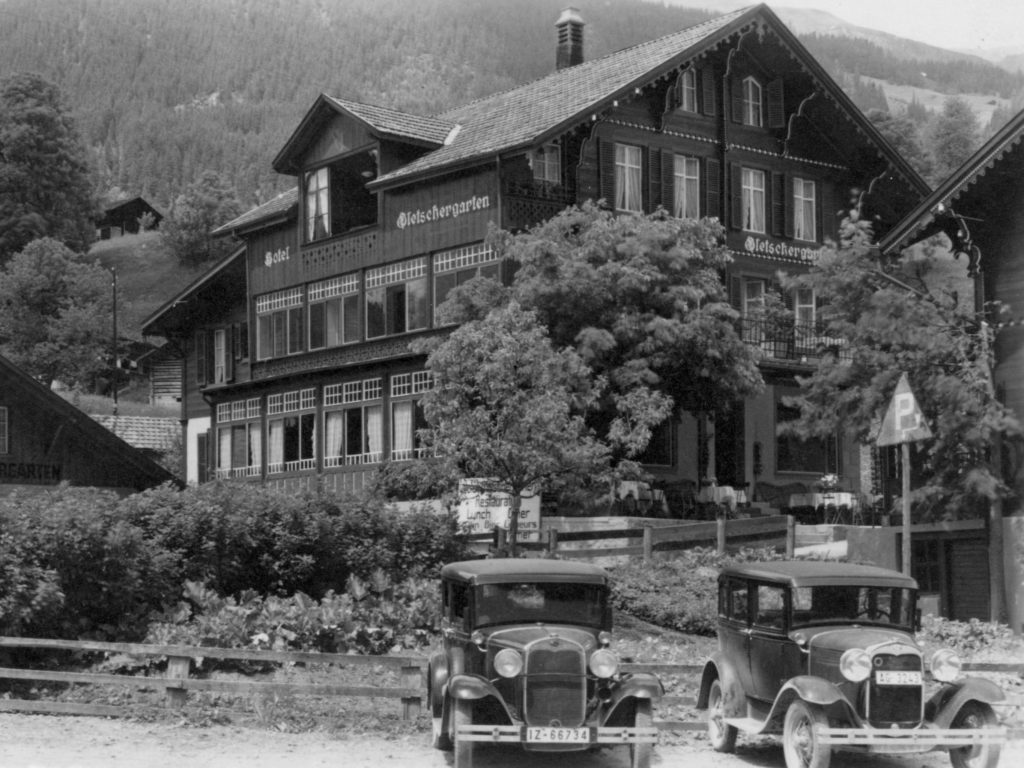 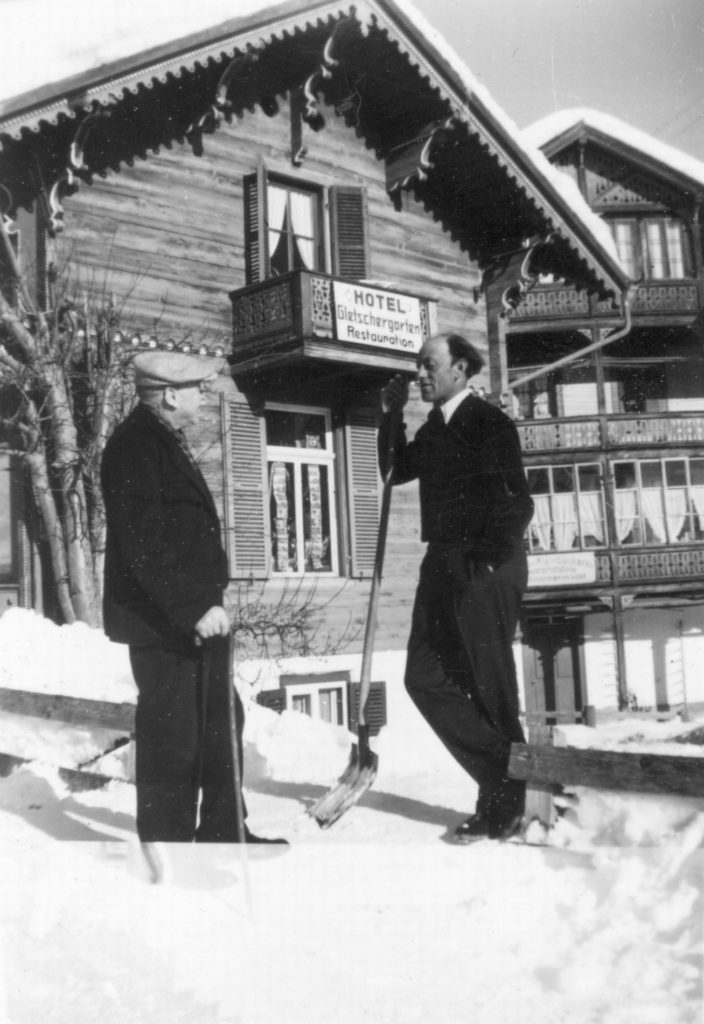 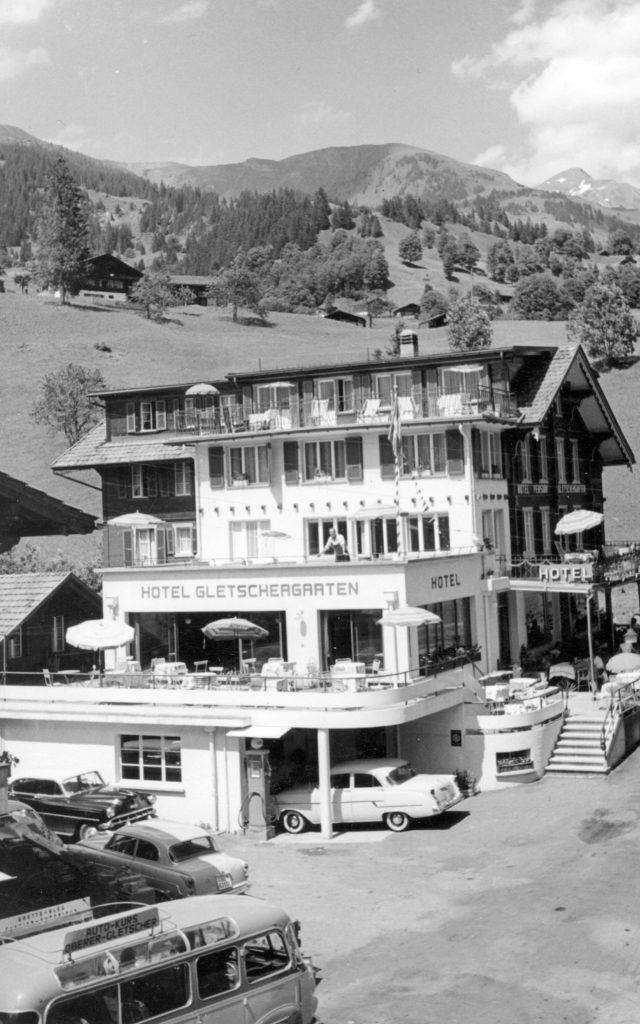 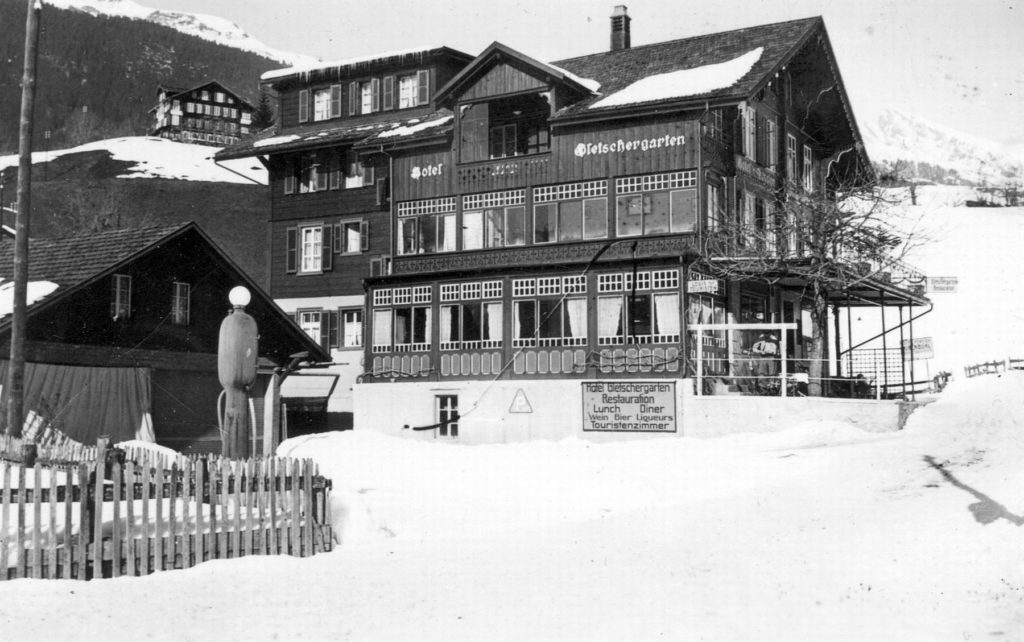 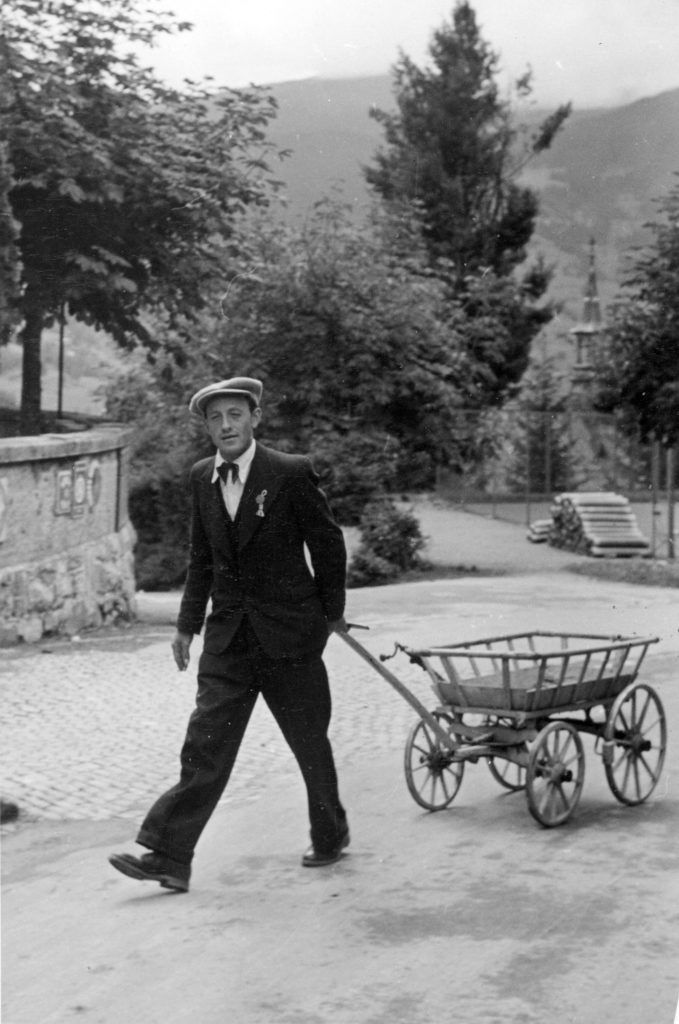 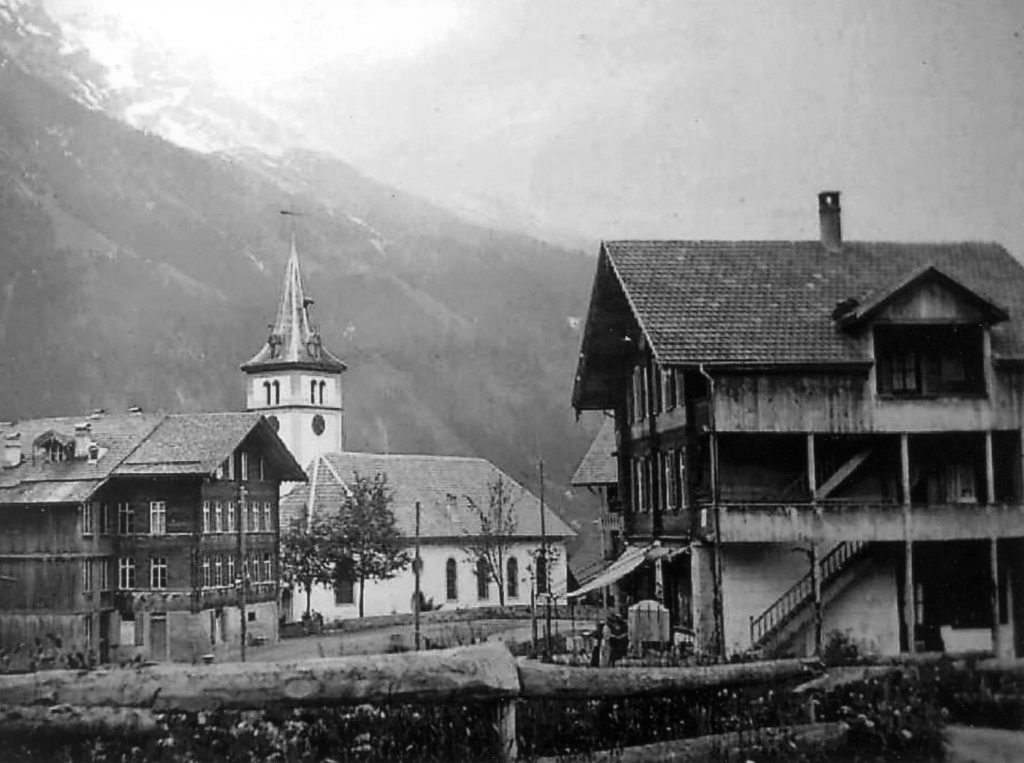 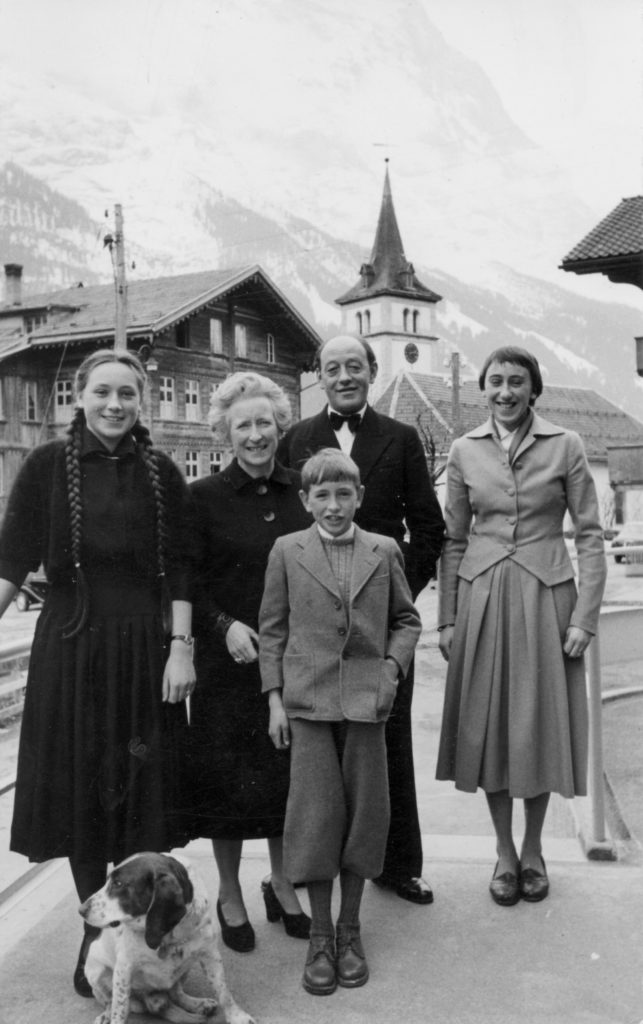 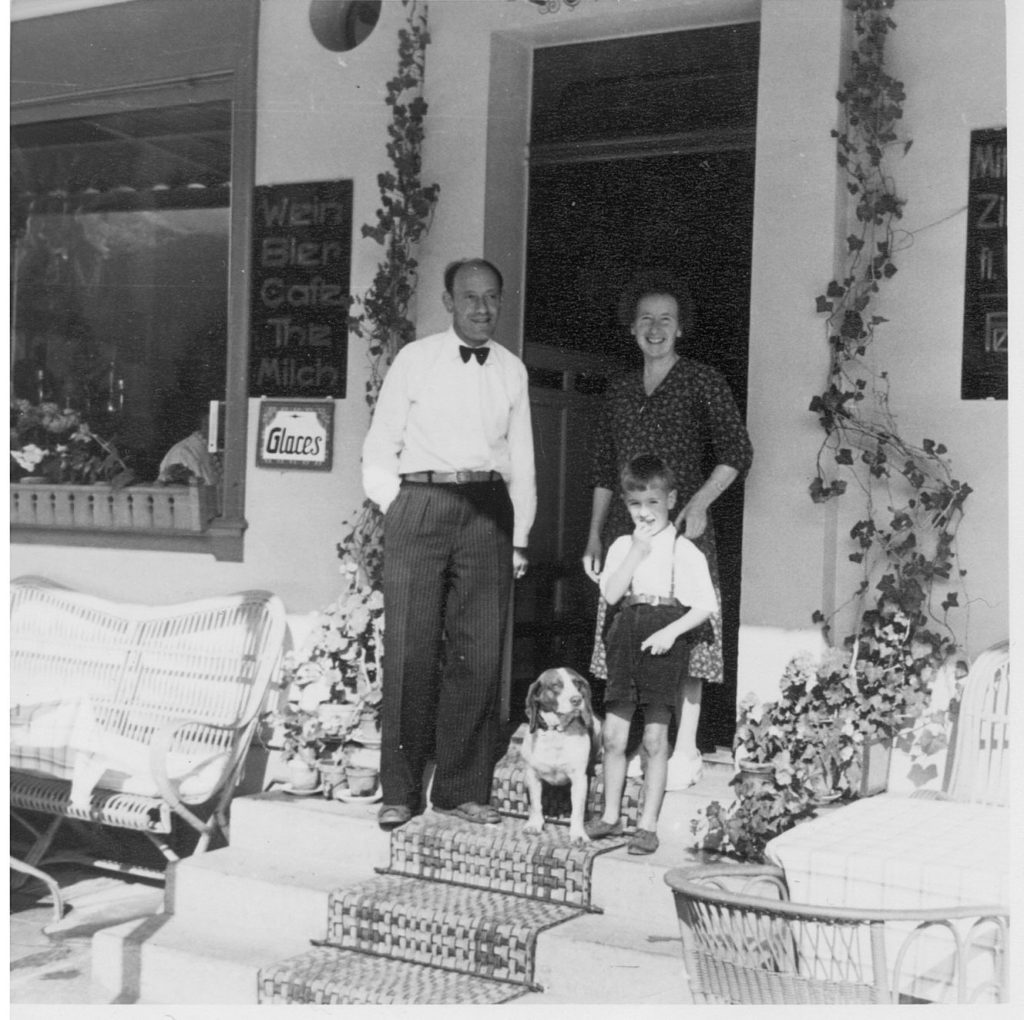 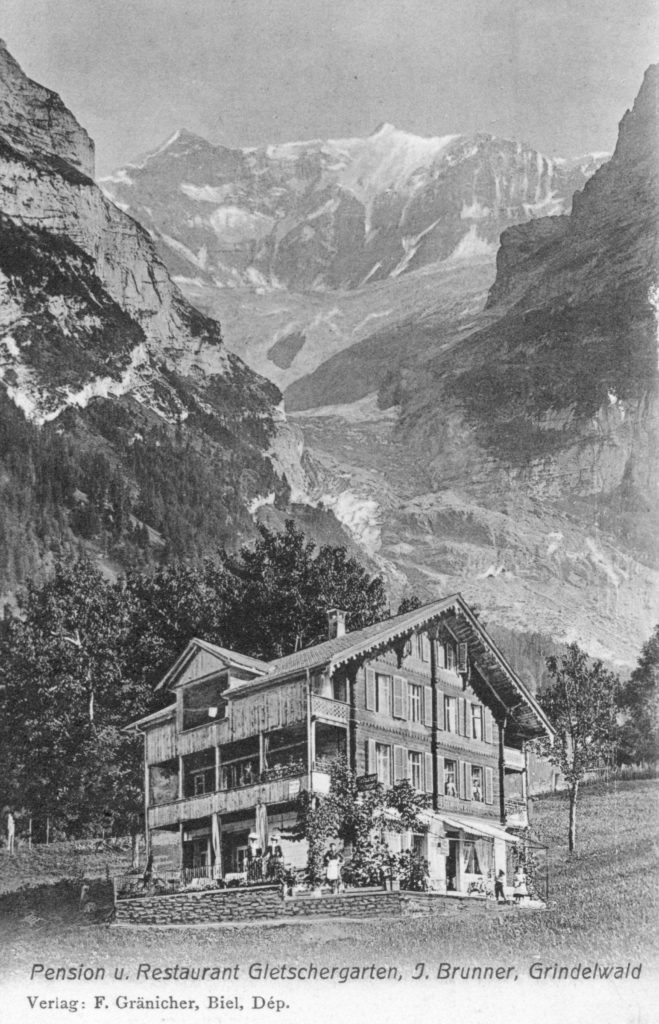 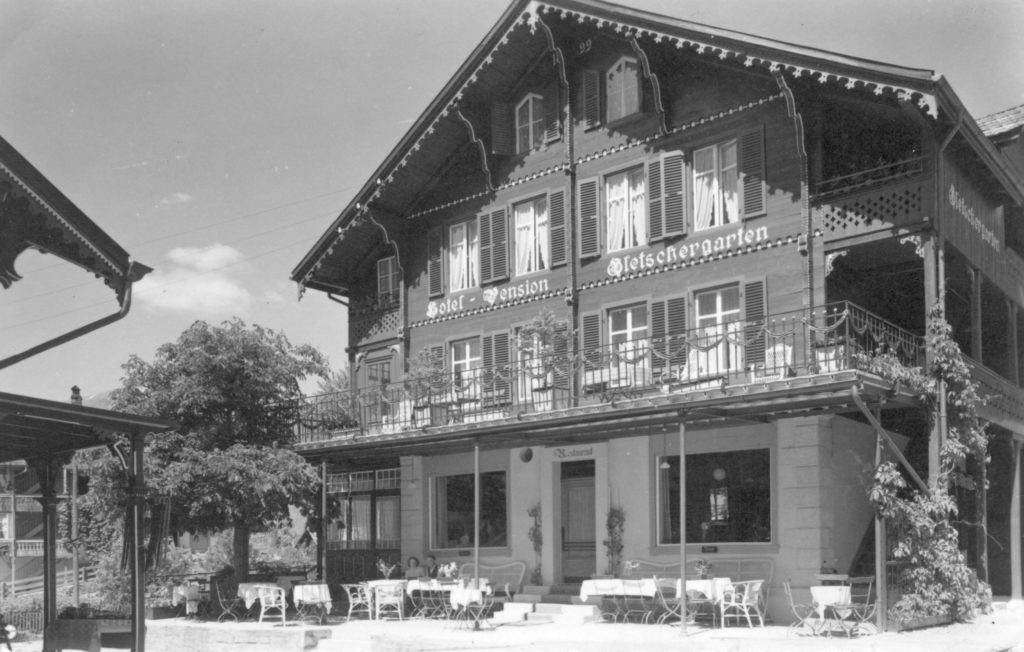 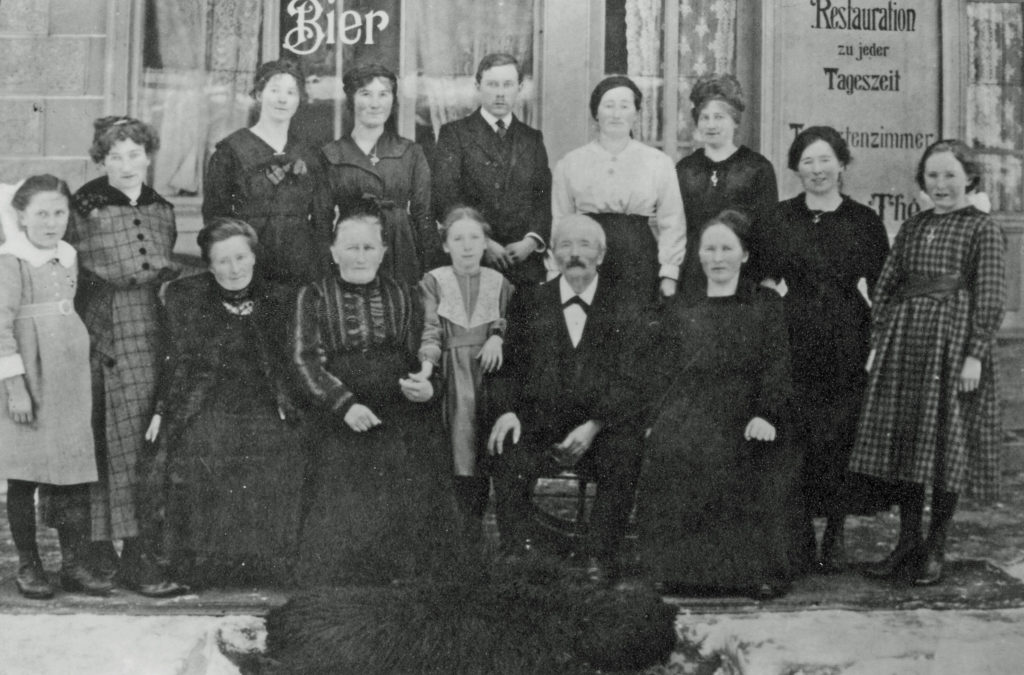 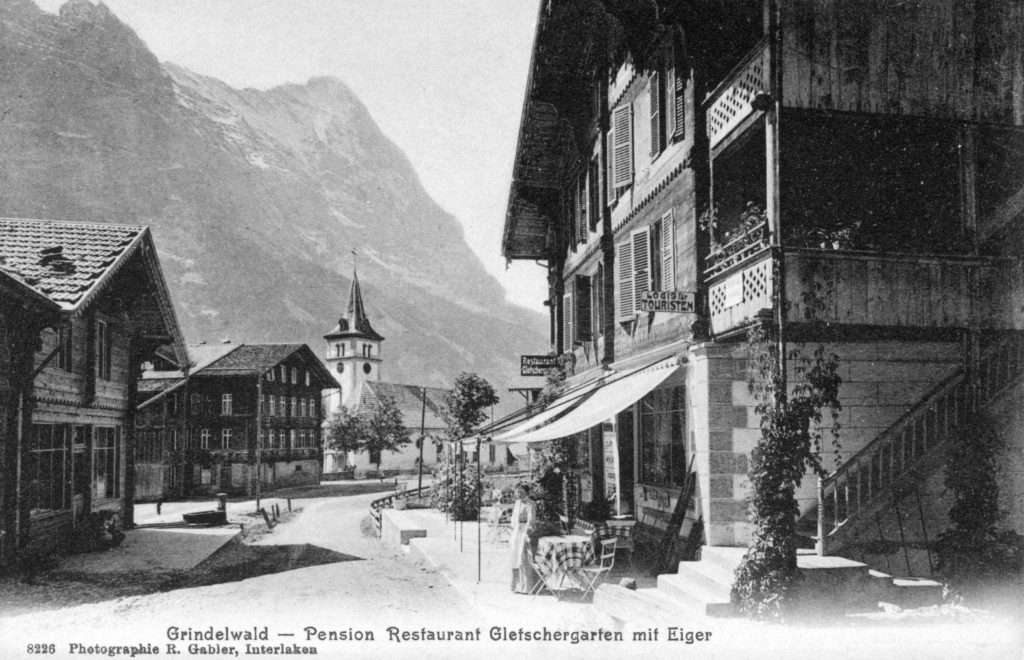